Former Governor of Kaduna State and the Chairman of the Caretaker Committee of the Peoples Democratic Party, Senator Ahmed Makarfi, has said debunked the rumour that he has accepted Ali Modu Sheriff 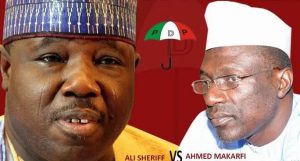 as the authentic chairman of the party despite the peace pact that happened on Friday between both men.

Makarfi, who spoke to reporters on with on Friday, also said the peace pact had nothing to do with the case involving both factions at the Supreme Court.

The peace pact was the outcome of the meeting between the two groups which was brokered by the party’s Reconciliation Committee headed by Governor of Bayelsa State, Mr. Seriake Dickson, last week.

Markafi said his faction would pursue the case to a logical conclusion at the apex court.

He, however, said he would not obstruct any move for a peaceful resolution of the crisis.

“It was just an agreement to desist from negative media exchanges of words and nothing more. We cannot be a problem to a meaningful and peaceful resolution. Once it is meaningful and comprehensive, we can’t hinder that.”