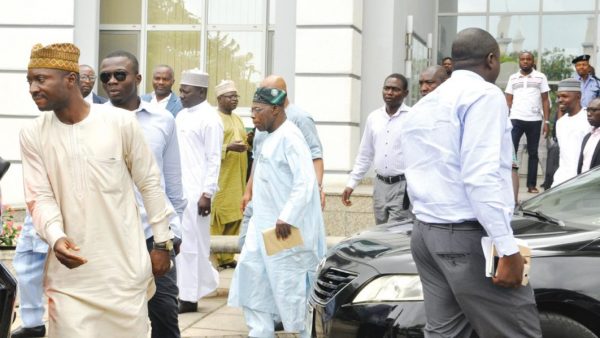 Former President Olusegun Obasanjo yesterday afternoon chided the Nigeria Police for keeping him waiting at an event organised by the security agency in Lagos.

Obasanjo, who was the special guest of honour at the maiden yearly special training and capacity development organised by the Assistant Inspector-General of Police (AIG) in charge of Zone II, advised them to be ready when next they invite him to an event.

The reaction of the former president sets what looks like an official precedent in efforts to curb lateness to corporate meetings in the country . Most public sector-organised events often take off many hours behind their official schedule at a time known as ‘African time’ leading to the loss of man hours in private and government businesses. In Nigeria, the practice has over time been generally accepted as normal.

The former president was at the Federal Palace Hotel, Victoria Island, Lagos venue of the training for about 90 minutes before the event started. “Next time, before you call me, please be ready,” Obasanjo said as he stormed out of the hall.

Billed for 10:30 a.m., the police event did not begin until 11:52 a.m., with the former president informing the gathering he had to return to Ogun State for an event he left midway to attend the police training.

It was learnt that AIG Kayode Aderanti, the host of the training, had sent a police helicopter to convey Obasanjo to the venue. There was, however, a communication breach between operatives that went to bring Obasanjo and the team expecting the Inspector General of Police, Ibrahim Idris.

Speaking on the initiative, Obasanjo said there was no substitute for training, urging security operatives to be in tune with the best practices alongside their contemporaries in other parts of the globe. According to him, all human institutions need constant appraisal, regeneration, introspection and training.

“Police must be aware and in touch with new developments in other parts of the globe. I can see my former IGP Musiliu Smith. Smith is completely out of date to give lecture on police duty. He has experience to share with you, but not on modern ways of policing,” Obasanjo said.

Idris who got to the venue of the event around 12:19 p.m., about 10 minutes after Obasanjo left, apologised for being late. “I was told former President Olusegun Obasanjo was here and I would have loved to meet him. He’s a committed Nigerian who has given so much to this country. I sincerely appreciate his coming, which shows the level of his commitment to our quest for democratic policing.”

The IGP expressed optimism that such trainings would improve the level of professionalism of policemen, adding that in no time, the police would not only be celebrated at home but also abroad.

In his remarks, Aderanti advocated heavy investment in security, commending the IGP for placing a high premium on training. He expressed the hope that the training would enhance the capacity of the participants.

At another event yesterday, Obasanjo blamed the loss of values in the society on the high rate of criminality and delinquency. The former president, who spoke in Abeokuta at the 2017 International Youth Variety Day and Public Presentation of volume one of Olusegun Obasanjo’s Books for Children, said it was sad that youths now lack morals and values.

The programme organised as part of activities to mark the commissioning of the Olusegun Obasanjo Presidential Library (OOPL) was also part of his 80th birthday activities.

Obasanjo who went down memory lane to recall his Yola prison experience during the period of his incarceration under the late Gen. Sanni Abacha-led military regime, said his interaction with the inmates revealed that some of them were being punished for offences committed as a result of the moral decadence in the society.

He chided religious institutions, parents, teachers and community leaders for not living up to expectations from them. Obasanjo expressed regret that Nigeria has no “institutional memory”, saying that the nation has been careless with what it ought to preserve as national treasures.

He lamented the situation in some of the country’s national museums. “There is nothing to write home about in most of our museums,” he said.
“One of the confusions in people’s mind is that Presidential Library is the same as normal library. And I see many people sending books to me. The library is for both young and old. I also believe that it might start bridging the gap in our behaviour and attitude about our carelessness in preserving our national treasures. One of our behavioural patterns and attitude is that we have no institutional memory; that is what brings about the idea of Presidential Library. If you go into our national museums, the situation is pathetic”.

Minister of Education, Malam Adamu Adamu, in his speech noted that the library and books of the former president were borne out of his interest and passion to move the Nigerian’s education system forward.

Adamu, who was represented by Dr. Yakubu Gambo, described the former President as a detribalised Nigerian and a rare gift God has given to Nigeria.
The Wife of Ogun State governor, Mrs. Olufunso Amosun described Obasanjo as a role model, a devoted and patriotic Nigerian.