Two days ago, Popular Nollywood actress, Oge Okoye claimed a dog picture belonging to US reality star and actress, Kenya Moore as hers  on Instagram.

The Instagram post was unfortunately spotted by the US actress’ fan page and quickly reported  the light-skinned actress as “Some lady in Africa”. And now Nigerians can’t seem to get over it!

Even after another controversial Nollywood actor, Uche Maduagwu realeased a statement in an instagram post of his own saying that the actress was almost duped by wanting to buy stolen dogs from a phone call confirmation. Nigerians still won’t back down. To the extent that she disabled comments from her page.

Now a colleague is calling her fake! Toplis Chioma posted this image on her facebook in mockery of the event. 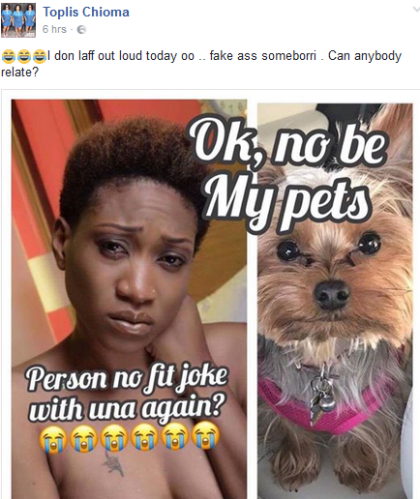