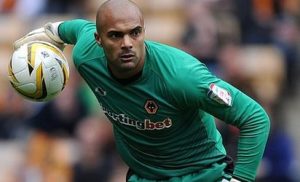 Super Eagles technical director has replaced injured goalkeeper, Carl Ikeme, with Tope Okeowo of Peckham All Stars ahead of Thursday’s friendly against Senegal in London.

The Wolverhampton Wanderers of England goalkeeper was missing in the team’s final training session due to a knock.

It is very likely that Okeowo will man the goal for Nigeria as the other invited goalkeepers, Daniel Akpeyi and Ikechukwu Ezenwa arriving camp Thursday morning.

Okeowo had been at Peckham Town for many years, helping his team get promotion from Division Two to Division One in their first season in the Kent County League.

He produced some outstanding performances in 2015/2016 season which saw him help his team win promotion into the Premier Division of the Kent County League.

Nigeria will take on Senegal at the Hive Stadium, Barnet FC’s ground on Thursday from 8 p.m. before wrapping up their schedule against Burkina Faso next week Monday to round up their two-game international friendly.