The Governor of Ondo State, Rotimi Akeredolu has frozen accounts of the 18 local government area of the state.

It was gathered that the government had sent circular to all the 18 council areas to inform them of its decision, reports have it that 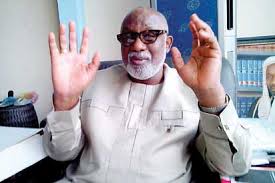 salaries of the political appointees in the 18 local governments had been stopped as their names have allegedly been removed from the payment voucher of the government.

The affected appointees include secretaries of the councils, personal assistants, special advisers, chiefs of staff among others.

Sequel to the freezing of the accounts, reports have it that the local government chairmen would not be able to have access to the accounts of their respective councils again until further notice.

The source said, “The government has frozen the councils’ accounts since last week and all the council chairmen are aware already.

“The implication of this is that the chairmen have been rendered powerless financially because they will not be able to take or spend any money from the council’s purse henceforth.”

When contacted, the state chairman of the Ondo State chapter of the Association of Local Governments of Nigeria, Mr Bayo Alarapon, who confirmed the development said the association had not yet decided on the next action on the matter.

Alarapon, who is the chairman of the Akure South Local Government said, ” We have not really gone into the matter, but we are already into it and whatever we decide later, we will let the world know.”