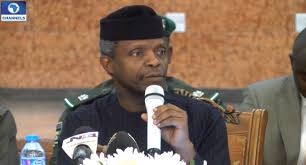 Acting President, Prof. Yemi Osinbajo will on Tuesday next week perform the Ground Breaking ceremony to mark the commencement of the construction of Lagos-Ibadan Railway Line.

The Acting President, Prof. Yemi Osinbajo (SAN) will perform the ground breaking of the Lagos-Ibadan Railway Line which is the Second Segment of the Lagos-Kano Standard Gauge Railway System with an extension to the Lagos Port Complex, Apapa.

The chef host of the historic event is the Minister of Transportation, Mr. Chibuike Rotimi Amaechi while the event will be attended by important dignitaries cutting across the spectrum of the society including State Governors, Captains of Industry and Stakeholders in the Transportation Sector with take-off at the Ebute-Metta Railway Terminal, Lagos

The Lagos-Kano Railway Standard Gauge Project will not only generate massive employment for the teeming youths but also help to bridge the Infrastructural deficit in the Transportation Sector of the economy.