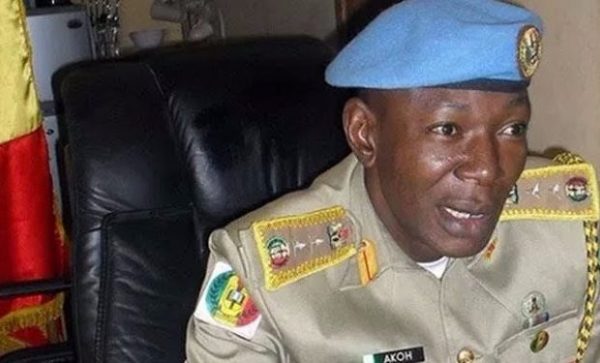 The national commandant of the Nigerian Peace Corps, Dickson Akoh, arrested on Sunday by the police, is still being held nearly a week later, authorities have said.

Mr. Akoh, 43, was arrested after he turned himself in at the FCT command headquarters, saying he learnt the police were looking for him.

He was detained at a facility run by the police special anti-robbery squad in Abuja, PREMIUM TIMES learnt the evening of his arrest. He had not been released since then.

On Friday evening, the police told PREMIUM TIMES they charged Mr. Akoh to court earlier in the week, although the claim was disputed by sources close to the commandant.

“We arraigned him at the Federal High Court in Abuja on Monday,” FCT police spokesman, Anjuguri Manzah, told PREMIUM TIMES by telephone.

Mr. Manzah declined further questions on the matter, including whether the police procured a court order to continue holding Mr. Akoh in detention beyond the legally-allowed 48 hours.

But two sources close to Mr. Akoh said the police did not arraign the commandant.

The sources said the police tried to arraign him before Gabriel Kolawole of the Abuja Division, but the judge declined to entertain the case immediately.

“Justice Kolawole asked them to come back on March 28 for the case,” one of the sources said.

The sources spoke on the condition of anonymity to avoid complicating an ongoing negotiation between the authorities and Mr. Akoh’s representatives.

The incident came three weeks after the Nigerian Army, police and the SSS, in a joint operation, stormed the Peace Corps’ head office in Abuja, arresting its founder, Mr. Akoh, and other national leaders before shutting the facility down.

PREMIUM TIMES confirmed at least two people were injured during the raid, but could not independently verify what the security agency were responsible.

On March 1, the police paraded Mr. Akoh and his officials, 49 in total, and accused them of running an outlawed organisation with intent to perpetrate fraud and jeopardise national security.

The police said a 2013 “official gazette” of the Nigerian government “dissolved and proscribed illegal security outfits” which included the Peace Corps.

A few days later, authorities slammed a 90-count charge of recruitment scam, money laundering and impersonation to the tune of N1.4 billion on the Mr. Akoh and his comrades.

Mr. Akoh strongly denied the charges, saying he had been investigated and cleared by anti-graft officials.

Millicent Umoru, a spokeswoman for the Peace Corps, condemned Mr. Akoh’s arrest and demanded his immediate release in a telephone exchange with PREMIUM TIMES shortly after he was arrested on Sunday.

The incident came amid efforts by the National Assembly to complete final amendments of the harmonised version of the Nigerian Peace Corps Bill and dispatch it to the executive for assent.