Home News Feed Police Arrest ‘Fake Mourner’ Notorious for Masquerading as a Close Friend at...
Facebook
Twitter
WhatsApp
A notorious fake mourner who has been terrorizing grieving families and obtaining money at different funerals, has been finally apprehended and served justice. 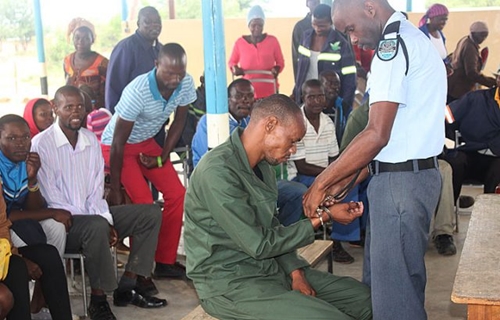 A 37-year-old man identified as Olebile Mothofela a.k.a Kabelo Montsho, who is notoriously known as a bogus (fake) mourner and has been terrorising grieving families across Zimbabwe, has this week, pleaded guilty to a single count of obtaining by false pretences after he was finally apprehended.
Mothofela who faced a possible 11-year sentence after he was arraigned before Chief Abraham Moipolai Kgaje of Shashe Bridge Customary Court on Wednesday morning, was sentenced to 18 months and four strokes on his bare bum for his transgressions.
The serial fake griever was unmasked a fortnight ago after he was caught on cameras giving a moving eulogy about his “fallen friend”, Corporal Dintle Dichaba at Shashe Bridge.
Mothofela had made a habit of crashing funerals under the guise that he was ‘best friends’ with the deceased in order to get free food, VIP treatment and defraud the grieving family.
According to Tonota Police Station Commander, Kenanao Badumetse, Mothofela was arrested in Maunatlala on Monday morning after being spotted at a funeral in the village.
“We knew that his main targets funerals and police all over the country were on high alert. The picture on The Voice also helped us a lot as people could easily identify him,” said Badumetse.
Speaking exclusively to The Voice, Maunatlala Station Commander Ogaufi George, whose officers made the arrest, said that although the accused was spotted at a funeral no one in Maunatlala has reported him for any wrong doing.
Mothofela pleaded guilty to the charge and asked for leniency claiming that he takes care of his grandparents and his twin daughters. “My grandmother is blind while my grandfather is wheelchair bound,” he said sparking fits of muffled laughter in court.
He further said if given until month-end he would be able to reimburse Dichaba after selling his plot to which Kgaje curtly responded. “If you lied in front of hundreds of people at a funeral why would you not lie in front of a handful in court.”
“It is heartless to target a family in mourning with lies and false promises then leave them behind in debt. It is a sin even in the eyes of God,” said Kgosi Kgaje before condemning him to one and a half years in jail and four lashes of the cane.