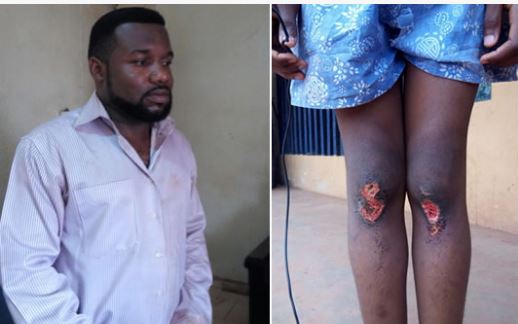 A man, Mr. Chinedu Okeke, has been arrested by the police in Enugu for enslaving and repeatedly torturing his son.
It was gathered that Okeke, who lives in the Trans Ekulu area of Enugu, constantly subjected the 14-year-old boy, Kelechi, to various forms of physical and emotional abuse.
The man cited Kelechi’s alleged ‘stubbornness’ as the reason for the inhuman treatment.
Kelechi was tied with a rope, and made to kneel on stones in a dark room, when the police, acting on intelligence informed, stormed the family house to arrest Okeke on March 15, 2017.
The Police Public Relations Officer, Enugu State Police Command, Mr. Ebere Amaraizu, who confirmed the development on Sunday, said several fresh wounds, inflicted by Okeke, were found on Kelechi’s body when he was rescued.
It was learnt that Okeke habitually flogged the boy with wires and heavy sticks, purportedly in a bid to ‘beat the stubbornness out of him’.
“Okeke is always in the habit of subjecting the son to inhuman treatment, such as kneeling on stones with his hands tied together, and massive flogging with wires and other dangerous objects, thereby leaving his entire body scarred with injuries,” Amaraizu said.
The police spokesman further revealed that Okeke was not living with Kelechi’s mother, who left him for undisclosed reasons.
But Amaraizu added that Okeke is currently living with the wife of a pastor, who left her husband to move in with him.
The said woman, who now lives with Okeke, already had four children for the pastor.
Amaraizu said Okeke and his concubine, the pastor’s wife, turned Kelechi to a slave.
“Following the rescue of Kelechi with injuries and the arrest of Okeke, facts emerged that Kelechi’s mother is not living with the father, although there appears to be unresolved marital issues which left the little boy in the hands of the father.
“Further findings revealed that Kelechi’s father is however living with a woman with four kids belonging to a certain pastor in Enugu.
“The woman has abandoned the pastor over a yet to be established issue and now lives with Kelechi’s father, and in that process allegedly turned the little boy to a slave,” Amaraizu said.
Kelechi, while narrating his ordeal to the police, disclosed that he was subjected to constant torture for about one month before he was rescued.
Meanwhile, Okeke, who is currently in police custody, has claimed that the devil was responsible for the inhuman treatment he subjected his son to.
But he insisted that the boy was stubborn, adding he only tortured Kelechi in a bid to discipline him.