The suspected kidnappers, Azeez, 26 and Jablet, 22, whose addresses were not given, are facing a charge of attempt to kidnap.

The prosecutor, Sergeant Innocent Odugbo, told the court that the accused committed the offence on March 7, at No. 10, Obiajunwa St., Okumula Ilasamaja, Lagos State.

He said that the accused, who worked in a sachet water factory, conspired to kidnap a daughter of their employer.

“A security guard at the factory heard their plans and informed their employer, who reported the matter to the police.

“The accused were apprehended when they were about to carry out the plan, ” he said.

The offence contravened Section 404 of the Criminal Law of Lagos State, 2011.

The Magistrate, Mrs O. O. Otitoju, granted the accused bail in the sum of N500, 000 each, with two sureties each in like sum.

She said one of the sureties must be a blood relation of the accused and both sureties should be gainfully employed.

Otitoju said the sureties should own landed property in Lagos State and they should show evidence of tax payment to the state government.

The magistrate adjourned the case until April 14, for mention. 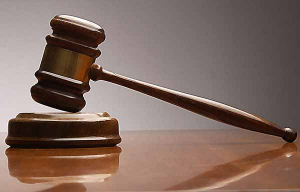