President Muhammadu Buhari has celebrated along side other Nigerians  with former president, Chief Olusegun Obasanjo, on the occasion of his 80th birthday.

According to the President’s Spokesman, Femi Adesina, President Buhari called in from London, where he is convalescing from an undisclosed ailment, Buhari told Obasabjo  that a time like this provided an opportunity to reflect on his invaluable roles and contributions to the unity and cohesion of Nigeria, the brotherhood of all Africans, as well as peace and amity over the globe. 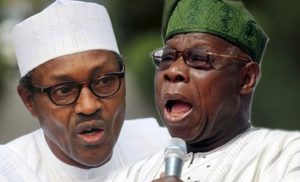 Recalling their days in the military, President Buhari said: “Those of us who served under you in various capacities recall a man with boundless energy, with razor sharp mind, and one who does not suffer fools gladly. Working with you was a school in itself, and the lessons learnt are worth their weight in gold.”

The statement said Obasanjo in turn wished Buhari good health, saying he stands together with him in prayers, so that he can return soon to continue the good work he is doing for the country.