Queen Elizabeth II has honoured a Nigerian nurse for her contributions to the United Kingdom’s health sector.

She is of Irish and Nigerian descents.

Her citation states that Anionwu contributed to the opening of the first sickle cell and thalassemia counselling centre in the UK.

She also helped to create the Mary Seacole Centre for Nursing Practice at the University of West London.
She retired from her careers in 2007.

She was born on July 2, 1947 in Birmingham, United Kingdom, to a 20-year-old Irish mother, Mary Furlong; and a Nigerian father of Igbo descent who was a law student, Lawrence Odiatu Victor Anionwu.

Her mother was in the second year as a student of Classics in Cambridge University when she became pregnant.

As a single mother with no support from the father of her baby, Furlong decided to leave Cambridge and took up a job in order to provide for her daughter Elizabeth and herself.

Her biography reveals that the young Elizabeth’s upbringing was heavily affected by moving between institutions and family.

She reportedly spent just over two years living with her mother, as she was given up to be cared for by non-relations when her stepfather refused to accept her.

For much of her childhood, Elizabeth was cared for by nuns, while she also spent several years in the Nazareth House Convent in Birmingham.

In her biography, she recalls sobbing her heart out on the bus when she had to leave the convent to go and live with her mother again.

“Every period of relative stability in childhood ended in sudden collapse,” she wrote.

Much later in life, she visited Nigeria, and her trip influenced her to take up her father’s name. Anionwu has credited her father, a barrister and diplomat, as her career inspiration.

Elizabeth Anionwu has one daughter, Azuka Oforka, who is an actress in the BBC TV series Casualty.

Elizabeth Nneka Anionwu has a PhD, a DBE, and an FRCN.

She began her nursing career at a very young age after being inspired by a nun who cared for her eczema. At the age of 16, she started to work as a school nurse assistant in Wolverhampton.

Later on, she continued with her education to become a nurse, health visitor, and tutor. She is ultimately thankful that her father pushed her to pursue her career.

She also travelled to the US to study counselling for sickle cell and thalassemia, as such centres and courses were not available in the UK.

In 1979, she worked with Dr. Brozovic to create the first UK Sickle Cell and Thalassemia counselling centre in Brent.

The opening of this counselling centre pioneered the opening of over 30 centres in the UK, using the Brent location as a basis.

And even though she had retired in 2007, Anionwu remains active in the nursing community and supervises many projects, including, “The development of caring for people with sickle cell disease and thalassemia syndromes: A framework for nursing staff;” and “Understanding the contribution of sickle cell and thalassemia specialist nurses. 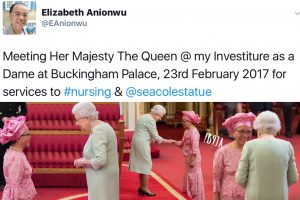