Home News Feed Revealed: Murdered UNICAL Lecturer Wrote About His Assassination Months Ago…See Details
Facebook
Twitter
WhatsApp
New details have emerged about the University of Calabar lecturer who was murdered in front of his house by unknown persons. 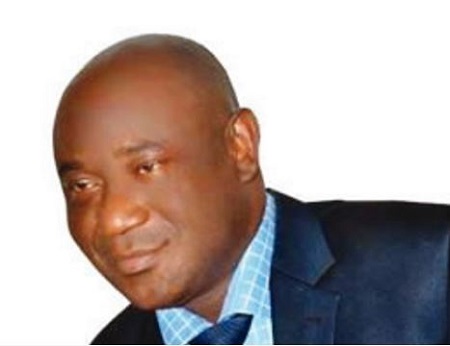 Dr Emmanuel Igbeng, the University of Calabar lecturer, who was killed last Thursday, wrote about the assassination months earlier.
Igbeng was shot at about 8:30pm on Thursday at the gate of his house located at Asuquo Abasi Street, off Uwanse Lane in the Calabar-South axis of the metropolis.
His death sparked a cult war between KKK and Vikings, leading to the death of about seven persons in three days.
After his death, it emerged that the UNICAL’s Department of Accounting lecturer, an alleged member of the KKK group, had written about his planned assassination on his Facebook page in November 2016.
In a November 16th post, Dr. Igbeng had alleged that some politicians were planning to kill him and one Romanus Egbonyi.
He also suggested, in the post, that “law enforcement agencies” were aware of the alleged plans.
Below is what he wrote:
“As the Lord God of heaven lives,Any man who disguises in the name of politics to desecrate the land of Ekureku either through burying of infants humans or animals, burying charms on the land of Ekureku, or causing the death of Ekureku son or daughter,or plotting to kill, harm or Mame any Ekureku person such as the one currently being circulated by the coward politician who claim lordship of politics in Ekureku and beliefs on politics of intimidation, please let me announce to all that the game is over,and this is judgement time.
“When not only the law enforcement agencies have been put on the know of all the secret and open discussion on the plot to kill Dr Emmanuel Igbeng (kudos) and Romanus Egbonyi but Almighty God is also is the business of avenging for all the atrocities committed against the land of Ekureku.
“Without reservation, I am putting all necessary to resist any form of intimidation I will also not fail to expose arms and ammunition acquired and all the recruits used to achieve their heinous activities including their cult group would be exposed. let me also inform all finally that no amount of stolen wealth that is turning sone mad would save them when the revenge would start and I cannot be taken by surprise.so be warned.” 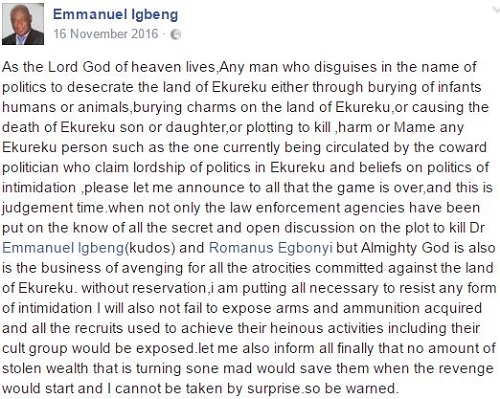