The Lagos State Command in Ibeju Lekki has arrested an employee that goes by the name, Stephen Ochui for allegedly robbing his employer by the name Paulina Paul.

The suspect,Stephen Ochui, reportedly connived with his friend Ibrahim Mohammed and others at large to attack the woman in her residence on Olomide Igiala Street, Oribanwiwa Phase II, Ibeju Lekki.

It was gathered that restaurant was owned by Ms. Paullina

Reports gathered has it that all that was stolen estimated at about N2m which included Paul’s phone, jewellery and clothes, among other valuables. 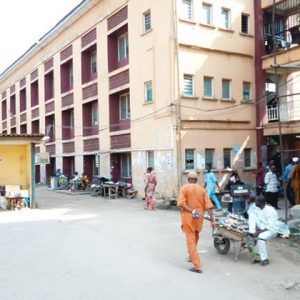 Paul started working in the restaurant sometime in January 2017, and after a week, he was sacked. After the close of work on the last day, he allegedly requested his wages for the period, which amounted to N3,500, but the woman told him to come for the money later.

Around 10pm on January 21, he was said to have gone to the restaurant and threatened the boss to pay the money immediately, or he would reduce her to bankruptcy.

On January 22, at about 2.30am, the robbers reportedly stormed Paul’s house with a gun and cutlass and made away with her property, including a Toyota Matrix.

The incident was reported to the police, leading to the arrest of Ochui and Mohammed.

But the salesman denied knowledge of the robbery, adding that his statement was a mere threat.

He said, “I was working with Madam Paulina (Paul) as a sales representative of her restaurant. She was to pay me N15,000 per month and N200 for transportation on a daily basis.  I only worked there for a week.

“I left because the second sales representative, Justina, told me Madam did not treat her well. I advised her to be saving money on a daily basis if she wanted to go back to Akwa Ibom where she came from. But she went to tell Madam that I advised her to steal her (Paul’s) money.

“Madam was angry that I wanted to corrupt her and she terminated my appointment. She promised to pay the N3,500 I worked for after she must have discussed with my agent. On January 21, I went there to collect the money, but Madam told me she didn’t have money. After much persuasion, she gave me N1,100.

“I angrily told her that if she refused to pay my money, her shop would close down. I was surprised that she brought policemen to arrest me on Monday, January 23, alleging that I was the one that came to rob her based on my earlier threat. I only threatened her so that she would pay the N3,500.”

The second suspect, Mohammed, also denied his involvement in the crime, saying he only knew Ochui as a neighbour in the community.

“I was advised to run to avoid police arrest, but I declined. I wanted to take a breakfast when policemen came to arrest me. I did not belong to any robbery gang and I have not involved in any criminal activity in my life. I am a mechanic,” he added.

The two suspects were brought before an Ikeja Magistrate’s Court on Thursday on two counts of robbery by a police prosecutor, Inspector Benedict Aigbokhan.

Aigbokhan told the court that the offence was punishable under sections 297 and 295 (2) of the Criminal Law of Lagos State, 2011.

The defendants pleaded not guilty and elected summary trial.

The presiding magistrate, Mrs. O.A. Akokhia, granted them bail in the sum of N500,000 with two sureties each in like sum and adjourned the case till April 28, 2017.