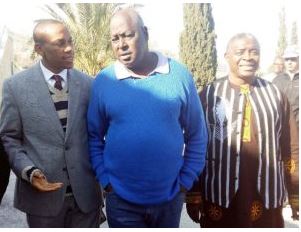 The Secretary to the Government of the Federation ( SGF), Engr. Babachir David Lawal has taken a swipe at Christians in Nigeria, accusing them of praying for President Muhammadu Buhari to die so that acting President Yemi Osinbajo can take over.

He stated this on Sunday at the Prayer Convocation on Mount Zion, Jerusalem, which had as its theme, “Building A Covenant Nation.”

“Churches have gone into overdrive praying for a Christian president to take over, glad that the president never returns so that our vice president and acting president continues because, according to them, the economy is doing better under him.

“They forget that in a presidential system, all power and authority reside with one president , every other authority is delegated by him.

“ The vice president also happens to be the chairman of the reformed power sector‎. Which also comprises 36 governors and a lot of other technocrats so whether the president is here or not, vice president Yemi Osinbajo has the authority to run the power sector.

“But he has to refer to the president before taking decisions. So the government whether vice president Osinbajo is acting or not is that of President Muhammadu Buhari.

“So while in church, I know what the church is saying. I have sat through a sermon where the pastor. Sought to attack me for supporting Buhari as a candidate.”