The Lagos State Government has suggested to the authorities of  Queen’s College, Yaba, that the school be shut down indefinitely pending when the school water system be fixed.

The state Ministry of Health said results from samples taken from water sources in the school showed that the water was “polluted,” adding that the school’s food handlers were also culpable.

This is just as some parents have threatened to take legal action against the school, saying someone must be held responsible for the two deaths in the college.

Reports have it that no fewer than 50 boarding pupils of the school were admitted in the school’s sickbay after eating spaghetti and drinking water in the refectory.

Parents and pupils told our correspondent that two pupils of the school –Vivian Osuiniyi and Bithia Itulua–who were in Junior Secondary School two and three respectively, died as a result of the epidemic.

The school’s principal, Dr Lami Amodu, was later transferred to another school in Edo State.

The school had been shut for the past two weeks to enable a health team to conduct adequate investigation into the incident.

It was learnt that the pupils were to resume on Sunday, March 19, when the Lagos State Government issued a statement 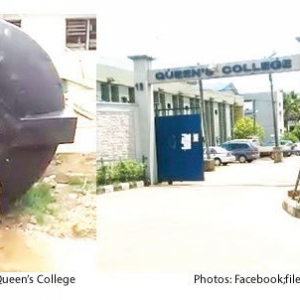 recommending an indefinite closure of the school.

The  state Commissioner for Health, Dr Jide Idris, who addressed the press on Thursday, stated that health records from the school’s sickbay indicated that the date of illness was January 16, 2017, adding that a total of 1,222 pupils presented themselves at the school’s clinic on account of abdominal pain, fever, vomiting and diarrhoea.

The statement from the ministry read, “According to the commissioner, the recommendation (for suspension of resumption) is necessary to ensure that all the sources of contaminants in the school, which had been causing the death of students, are properly handled.

“Idris said the source of the problem is the contaminated water. Water samples from six sources on the school premises were collected and analysed at the Drug Quality Control Laboratory of the Lagos State Ministry of Health in the Lagos  State University Teaching Hospital, Ikeja.

“Other  water samples from 10 sources were also collected and analysed at the Microbiology Department of LUTH, Idi-Araba. The results from the two laboratories showed high bacterial content in the water samples from the kitchen behind the dining hall and Queen’s Delight, the school’s water factory. The bacteria range from Coliforms, Escherichia Coli, Salmonella, Klebsiella ozoana and Aeromonas hydrophila.

“Specimens collected from 40 kitchen workers revealed that cysts of Entamoeba histolytica were isolated in the stool of 23 food handlers; Salmonella Paratyphi, the causative agent of Typhoid Fever, was also isolated from three food handlers.

“All these together imply a common source outbreak, showing repeated or continuous infection from exposure to the infectious agent. Findings from the investigations were consistent with Enteric Fever. The infection was most likely spread through contaminated water sources and infection by food handlers.”

Some parents called for a sanction of the school’s management for failing to prevent the outbreak.

A parent, whose daughter fell ill during the midterm break, said parents might take legal action against the school.

He said he had spent about N70,000 on the treatment of his daughter, who is in Senior Secondary School two.

He said, “My daughter took ill two days after she came back from the school; she had acute typhoid. I have spent about N70,000 on her.

“The government cannot afford to play the ostrich. If they don’t secure the children’s source of water, the death toll may rise. And we don’t even know how many have lost their lives during this break. My daughter is still on the edge as I speak.”

The daughter told PUNCH Metro that the septic tank of the school was not far from the school’s drinking water.

“And that is the only drinking water that we have. After my friends ate spaghetti and drank the water, they started vomiting and stooling. Two days after I returned home, I felt weak and had a bad headache. I was later admitted at LUTH,” she added.

Another parent faulted the Parent-Teacher Association for joining the school’s former principal to deny the problem.

“They sent text messages to parents, saying there was no epidemic. Things are happening and instead of us to do something, we are denying. Maybe if we had acted early enough, lives would have been saved. I paid N20,000 for the PTA levy to hire more sanitation workers and clean the water, and this is what we get? Somebody has to pay for this. You are a principal of a school and you couldn’t do anything? Do you know what it means to lose a child? Some parents are going through hell right now. I am crying. I am in pains. Until somebody sues Queen’s College, nobody will know what is going on,” he said.

The video of the  school’s water tank cleaned up by  posted by a social commentator also a radio OAP on Lagos Talks 91.3 , Jimi Disu, on Facebook.

The video showed that the water had a deep yellow colour, as screams of disbelief could be heard in the background.

The Minister of Health, Prof. Prof. Isaac Adewole, had yet to react to the report of the Lagos State Government, while the new principal of Queen’s College, Mrs. Bola Are, had yet to respond to enquiries from our correspondent as of press time.