The Constitutional Court in South Korea has upheld a decision by the country’s National Assembly to impeach President Park Geun-hye over alleged corruption.

The unprecedented decision was unanimous, with all eight judges on the court voting to remove Park, the country’s first female president, from office. South Koreans immediately took to the streets, with some groups protesting against the decision and others celebrating her removal from power. 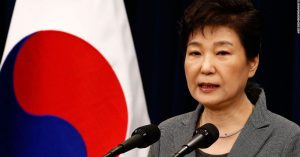 Two people died in the protests, a statement from Prime Minister and acting President Hwang Kyo-ahn said.
The decision was revealed by Justice Lee Jung-mi Friday in a live broadcast that gripped the nation.
“We announce the decision as the unanimous opinion of all judges. We dismiss the defendant President Park,” said Lee.
South Korea’s political stability is crucial to the security of the region — it is a key buttress against North Korea, its provocative neighbor, and a major trading partner with the US and its Asian neighbors.
Park is the first South Korean president to be thrown out of office by the court. An election for her replacement must be held within 60 days, with Hwang, the acting President, to set the day.
Park’s ouster means she loses the protection from prosecution she enjoyed as president. She could now face a formal investigation into her role in the corruption scandal which led to her impeachment.
During the announcement, anti-Park demonstrators were seen crying tears of joy and pumping fists in celebration, as applause rang out from the crowd.
Thousands of Park’s supporters waved South Korean flags as they stood on main thoroughfares near the Constitutional Court. 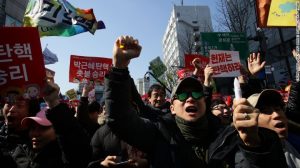 They were hemmed in by a ring of police officers, many wearing protective armor, and police vehicles.
A group of around 100 Park supporters tried to break through police lines near the court, and a number of people fell and were injured. Medical attention was provided at the scene.
(CNN )
Advertisement