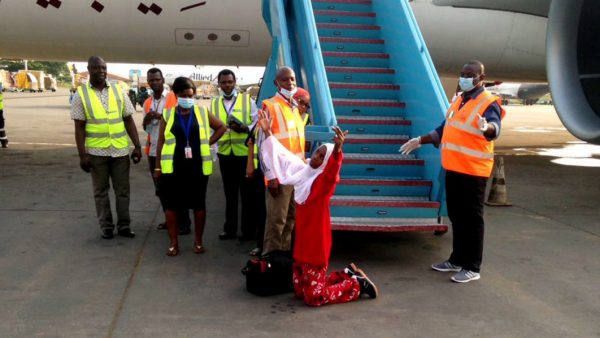 About 1,200 Nigerians are currently seeking asylum in Germany, some officials of the Federal Government have said. At least half of the number are also asking for protection in Switzerland which together with Germany is likely to deny them asylum, according to Abike Dabiri-Erewa, President Muhammadu Buhari’s Senior Special Assistant on Foreign Affairs and Diaspora.

Increased undocumented migrations and request for protection in other countries — even as analysts see signs of recovery from economic recession — are bad publicity for Nigeria and send negative signals to investors. The resultant brain drain will deprive the nation of the needed human capital to exit recession and increase production.

Report of rise in asylum requests is further aggravated by concerns that Nigerians in diaspora and their counterparts on temporary residency abroad are facing intense pressure and deportation from foreign countries.

Tens of thousands of asylum seekers are scattered across Europe but the Nigerian government says they will soon be deported based on agreements it reached with the affected countries. “We reiterate our call to Nigerians on the inherent dangers of irregular migrations,” Dabiri-Erewa warns. “Those who want to key into the voluntary return assistance programme being offered by Switzerland and Germany are advised to key into it. If an undocumented migrant chooses to return voluntarily, he will not be deported and he will also be supported to settle back with skill acquisition and start-up funds.”

Though not exclusive to Nigerians seeking greener pastures, the hostility cuts across Europe, America and even in neighbouring African countries where communitarian spirit and fellow-feeling originally had defined relations.

The Guardian observed that, in the last three months, no fewer than 859 Nigerians have been deported. Officials have described it as “a record.” At least two-thirds of the deportees are from Libya, South Africa and Mali.

The deportations were said to be connected with irregular entry, incomplete documents, immigration offences and alleged criminal acts, which warranted imprisonment and subsequent deportation.

In places like Libya, forcible eviction lately has no respect for immigration status, as it is driven by sheer hostility to blacks, where four out of every five are Nigerians.

Just last Tuesday, 171 Nigerians arrived in Lagos from Libya with tales of woe in the North African country. The voluntary returnees are made up of 95 female in total (83 adults, 10 children and two infants) and 79 male (73 adults, two children and one infant). At least three had medical cases. One came with burns and other injuries; another depression and the last had a minor ailment.

At least, six of the deportees were returned into the country for alleged drug offences and many others for various criminal offences including immigration breaches.

It was also the day some 41 Nigerian girls, who were victims of human trafficking to Mali, were deported to the country. On February 1, no fewer than 41 came in after forcible evictions from the United Kingdom. The Nigerian deportees, 33 males and eight females, arrived at the cargo section in an unmarked chartered Airbus 330 aircraft.

The Guardian learnt that the deportees had been kept in custody of the British government since October 2015 for illegal entry papers, family problems and expired stay among others issues.

On December 15, at least 140 Nigerians were deported from Libya. It was learnt that most of the deportees had also been in detention in various Libyan prisons before they were released after the intervention of the International Organisation for Migration (IOM) and the Nigerian embassy in Libya.

Many of the deportees told stories of how their houses were razed early January, with all their savings and valuables consumed. Dabiri-Erewa reiterated that the returnees were not criminals, but average Nigerians that had gone overseas in search of greener pastures that turned out unfulfilling.