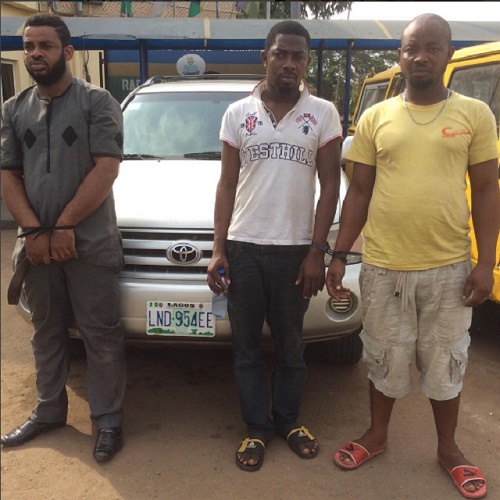 Three well-dressed corporate kidnappers have been arrested by operatives of Rapid Response Squad of the Lagos State Police Command.
The criminals were intercepted while fleeing in their victim’s car.
The suspects identified as Adekunle Funsho, Charles Ezeilo and Obioha Nnaji, were fleeing Ibadan, the Oyo State capital after collecting a ransom of N3 million from the family of a victim when they were arrested.
It was revealed that on getting the intelligence that the kidnappers were heading to Lagos with the victim’s Toyota Highlander, the police in Ibadan, radioed Lagos counterparts for assistance and the gang was trailed and arrested.
The criminals confessed to the crime during interrogation saying that they were serial kidnappers and that they always dressed like businessmen whenever they go for operations so that they would not raise suspicion.