A Kaduna Chief Magistrate Court has remanded a traditional ruler in prison custody following his arraignment before the court over the disappearance of a man since September last year.

The police had on Thursday dragged Damina Kurmi, the Chief of Bugon of Kurama Chiefdom of Kaduna State, and three officials of his palace before the court for alleged kidnap of one Usman Ori. Mr. Ori was allegedly kidnapped in Yalwa village, Yar Kasuwa area of Lere Local Government Area of Kaduna State in September 2016.

According to the police, Mr. Kurmi and the three other accused persons had “arrested” Mr. Ori for an unknown offence and the victim’s whereabouts has since remained unknown.

The Chief Magistrate, Abudu l-Aziz Ibrahim, remanded the suspects in prison custody and adjourned the case until Monday for further hearing. 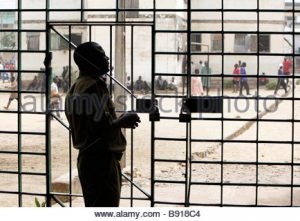