Three days after Academic and administrative activities were halted at the University of Ibadan, students of the institutions have been complaining about living in difficult conditions on campus, as sources of water and electricity have been switched off by the striking staff.

Activities was halted on March 20, 2017, when the staff declared indefinite strike because of what the union described as “illegal deductions of pension money from their salaries.”

Aside the pension deduction issue, the workers are also asking for unpaid promotion arrears, shortfall in salary payment, and better welfare for staff, among other issues.

Some of the students who spoke with our correspondent on Monday said there was no water and electricity in the hostels and in all the classrooms.

“Each time there is crisis between the school administration and the staff, the students are always at the receiving end,” said Kayode Onifade, a 300 level student of the Faculty of Arts.

“Our lecturers now combine their work with that of non academic staff because they get the keys to open the classrooms for lectures to hold and lock them after.

“In the hostel, we sleep in darkness. Many of us attend classes without taking our bath because there is no water. Both parties must reach an agreement for the sake of the students. The living condition is terrible,” added Onifade.

Since the strike began a week ago, gates to the institution have been locked, while lectures only resumed today (Monday).

Efforts to speak with the chairman of the institution’s branch of Senior Staff Association of Nigerian Universities, Wale Akinremi, by our correspondent proved abortive; as he refused to answer his mobile telephone.

The institution’s Director of Public Communication, Mr. Olatunji Oladejo, told our correspondent that efforts were being made by both parties to resolve the crisis. 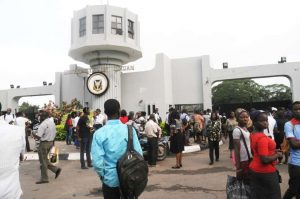