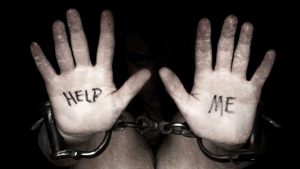 five million pounds to the course.The call was made by the United Kingdom’s Independent Anti-Slavery Commissioner, Kevin Hyland, at the UN Security Council Open Debate on Modern Slavery on Saturday in New York.

Hyland said that women and girls from Nigeria, who were illegal migrants, were victims of forced labour and sexual exploitation in detention centres across Libya, in attempt to get into Europe.

He pointed out that “for decades, transnational traffickers have operated in a particular part of Nigeria, deceiving victims with false promises of better lives in Europe”.

“But what was a trickle has now become a flow,” he said.

“These criminals are taking advantage of conflict and instability in the Lake Chad Basin and Libya and have massively scaled up their trafficking operations by utilising these now ungoverned routes.

“This is an eightfold increase from the numbers that arrived in 2014.

“The International Organization for Migration believes that 80 per cent are trafficking victims destined for brothels across Europe,” he said.

Hyland mentioned a particular State in Nigeria that he visited, saying “it is the main region where traffickers source their victims.

“This trafficking is especially brutal in nature.

“Women who insist they will not work as prostitutes are tied up in a position called ‘the crocodile’ where their hands are tied to their feet and they are left for days without food or water.

“Some are left to die as an example to others,” he stated.

According to him, the UK Government recently announced at least five million pounds to work in partnership with Nigeria to help tackle trafficking at source.

“All of the Nigerian survivors I met wanted to tell me about the identities, tactics and routes of traffickers.

“Unfortunately this information is not being routinely collected, analysed or acted on.

“Much more needs to be done to protect the vulnerable,” he appealed.

He said that Prime Minister Theresa May had committed the UK to international leadership in combating modern slavery.

“Unless those behind this trade in human lives are pursued and punished, vulnerable people will continue to be sourced, used, abused and replaced and treated as mere commodities.

“So, I urge international organisations and Member States and in particular, law enforcement and intelligence agencies, to prioritise efforts to increase cross border collaboration to investigate, disrupt and dismantle human trafficking networks.

“We need high profile convictions of the organisers, to act as a deterrent to others.

“This can be achieved through increased use of joint investigation teams, multilateral prosecutions and data and intelligence sharing.

“We need to get smarter at debriefing victims and sensitively sharing this information with law enforcement and victim support agencies, to inform disruption and protection efforts,” Hyland said.

He strongly welcomed UN Resolution 2331, which called for ‘proactive responses to protect against slavery and trafficking to be systematically integrated into humanitarian responses to conflict and related emergencies’.