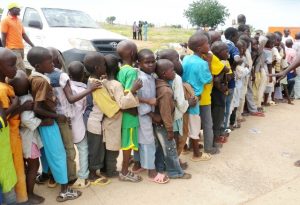 Mr Omar Abdi, the UNICEF Executive Director, Programmes, made the disclosure while speaking with newsmen in Maiduguri, who led a team of officials on a visit, said that UNICEF was working toward reaching more children affected by the problem in the area.
“We are seriously concerned about the situation of children as a result of conflict; nearly 50,000 children are severely malnourished as a result of food crisis in the North-East
“We have scaled up our programmes in working with the partners to support the government’s efforts toward responding to the crisis.
“So far, we have scaled up our response at the malnourished community reaching 12,000 children that were severely malnourished,” he said.
Abdi said that UNICEF still needs to do more, considering the gravity of the problem. “We need to double that number four times in order to reach those children that are affected.
”Children that are severely malnourished, if not treated, can be at risk of dying, not of malnutrition alone, but of diseases like cholera and diarrhea” he said.
The UNICEF official said that the visit to Borno was aimed at getting first hand information on the humanitarian crisis in the state.
”We are here to see the situation of children in this war-ravaged region and to talk to partners, government and non-governmental organisations on response to the emergency.
He concluded, ”UNICEF has always been around working with the state governments.”
Abdi described Nigeria as one of the largest UNICEF programmes in the world.

According to him, the agency is also concern about the protection of children, especially those affected by wars, and also their education. “Nearly a quarter of kids in the area are still out of school. “Those in schools are studying in overcrowded classes, so they need more spacious classes,” he said.