Super Eagles and Chelsea winger Victor Moses is excited about the two-year contract extension that will keep him at Stamford Bridge until June 2021.

The Nigeria international has been in amazing form at his new position ( wing-back)at Chelsea since head coach Antonio Conte’s decision to switch to a 3-4-3 formation in late September, contributing three goals and two assists in 25 Premier League appearances.

After signing the new deal that will see him earn over 100,000 pounds a week, Moses told Chelsea’s official website: “I feel very excited. I’m delighted to be here for another few years now and to sign a new deal. Now it’s time to concentrate on the team and keep working hard to make sure we win games and try to win the Premier League this season.

“We’re having a great season, I’m enjoying my football and we have a good manager here that has given every single one of us confidence. I just want to keep on enjoying it and working hard for the team.” 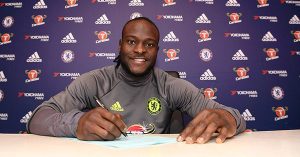