Super Eagles and Chelsea forward Victor Moses has withdrawn from the Nigeria squad due to an ongoing calf injury.

Moses, 26, reported to camp on Monday with the majority of the squad but was excused and allowed to leave on Tuesday.

The midfielder limped off with a calf problem in last Monday’s FA Cup win over Manchester United, but passed a late fitness test to feature against Stoke over the weekend, lasting 70 minutes before he was substituted for Cesc Fabregas. It is unclear if a replacement will be named for the Chelsea wingback.

While Tyronne Ebuehi reported to camp on Monday along with new boy Noah Obazee.

Ebuehi, first called up by Gernot Rohr for the opening World Cup qualifier against Zambia, turned down the call, claiming the time was not right. 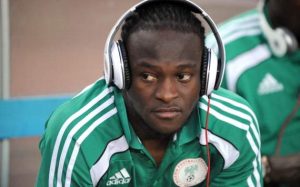