According to reports from the England this morning, Super Eagles and  Chelsea 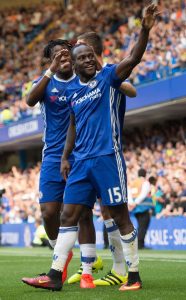 winger Victor Moses could be a doubt for Nigeria’s upcoming friendlies against Senegal and Burkina Faso at the Hive Stadium in London, England.

Moses limped off injured on Monday night as Chelsea beat Manchester United 1-0 in the Emirates FA Cup and a calf strain is the initial diagnosis of his ailment.

If that is confirmed by Chelsea medics when the Super Eagles star is further assessed in the coming hours, he could face up to three weeks on the sidelines.

Compared to last few seasons where injuries limited his appearances, Moses has been fortunate in the current campaign and has been available for selection in all the games.

Wolfsburg teen star Victor Osimhen is definitely out of the friendlies as he is still recovering from injury and has been replaced in the squad by Olanrewaju Kayode of Austria Vienna.