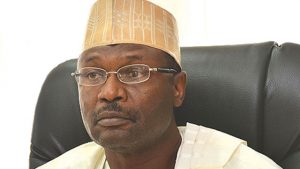 The Chairman, Independent National Electoral Commission, Prof. Mahmood Yakubu, has confirmed that Continuous Voter Registration would begin across the country, in April.

Yakubu gave the assurance on Monday in Abuja at the commission’s quarterly meeting with the media.

He said that during the exercise, efforts would be made to ascertain dead persons on the voter register and eliminate them, adding that cases of transfers of voting points would also be handled.

He said that the commission was approaching the update of the register with all cautiousness because of its sensitivity and importance in the electoral process.

“Election is essential based on a number of parameters. One of it is quality and credibility of voter register; the voter register is central to an election.

“After the 2015 general elections, we are compelled to see if we can clean up the voter register. For instance, we have to remove the names of the deceased from the register.

“But this is easier said than done because sometimes you may know that the person is dead but the process of removing the name from the system is not that simple.

“This is simply because in some cases we receive reports that candidates involved in an election were dead only for them to turn up at the commission few days later to say it is a lie that they are alive,” Yakubu said.

He said that the commission was also working on modalities that would assist it in the distribution of uncollected 7.8 million Permanent Voter Cards (PVCs) during the voter registration.

The chairman reiterated that the commission announced the dates of the 2019 general elections ahead to enable it to “plan properly’’ for it and stop being “master of last minute arrangement’’ for elections.

“With 70 million registered voters at the moment, and by the time we do the Continuous Voter Registration fixed for April, the number will definitely go higher.

“Ours is the second largest democracy in the world, and we just have to plan,” he said.

Yakubu disclosed that there were already two committees working on the delimitation and creation of more Polling Units (PUs) across the country, to ease voting process.

He expressed hope that the committees would submit their reports next week.

On monitoring of political parties’ finance and campaigns funds, he said that only two political parties had complied with the law, which required them to submit their financial details to the commission six months after an election.

“All political parties are in default in these areas. Only two parties have complied with the six months requirement.’’

On the solar-powered voting device developed by the National Agency for Science and Engineering Infrastructure, Yakubu said that INEC was already engaging the agency on the technology.

“We have written to them and we want to have open discussion with them so that we know what they have developed and how to avail yourself of it for 2019 or beyond.

“Whatever we come out with, we will let Nigerians know,’’ he said.

Yakubu added that the commission would continue to engage measures that would help to address voter apathy or low voter turnout during elections.