Acting Vice President, Yemi Osinbajo has sworn in Walter Onnoghen as the new Chief Justice of Nigeria at the Council Chambers of the Presidential Villa in Abuja.


After taking his oath of office, Onnoghen was also decorated by the Acting President with the national honour of the Grand Commander of Order of the Niger (GCON), as customary with the inauguration of CJNs.

Osinbajo also revealed that he spoke with President Muhammadu Buhari on Monday, and that the President had sent his good wishes to the CJN.

The Acting President believes that Justice Onnoghen is assuming the position at a crucial time in the nation’s history when many have lost confidence in the judiciary.

He therefore urged him to use his position to revive the judiciary.

Present at the occasion were Senate President, Bukola Saraki, former CJNs members of the Federal Executive Council, Justices of the Supreme Court, his family members, among others.

The Senate had confirmed t 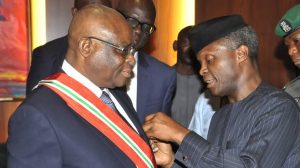 he nomination of Mr Onnoghen as the Chief Justice of Nigeria, on March 1.

The confirmation came after the House had screened him for nearly 1 hour 15 minutes.