The Minister of State for Foreign Affairs, Mrs 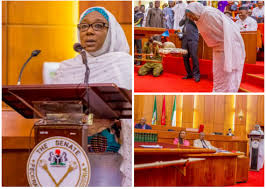 has debunked claims that Nigerians were killed in the recent xenophobic attacks in South Africa,she affirmed that no Nigerian was killed during that attack.

The minister disclosed this on Tuesday while briefing members of the Senate Committee on Foreign Affairs on what the Nigerian Government is doing to protect its citizens in South Africa from attacks.

She said the government would send a delegation to the country to ascertain what the issues were with the aim of finding solutions.

After the last xenophobic attack in April 2015 where 10 deaths were recorded and properties looted or destroyed, Nigerians in South Africa are still seeking compensation for destroyed properties.

However, Bukar-Abba told the committee that no compensation has been paid by the government.

The committee expressed displeasure at the manner with which the Ministry of Foreign Affairs has so far handled the crisis.

A member of the committee, Senator Gbenga Ashafa, called for hard hitting actions from Nigeria to address what has become a regular occurrence in South Africa.

The senators strongly condemned the recent attacks and looting of Nigerian-owned businesses in Pretoria West in South Africa.

The Nigerian community, led by Mr Ikechukwu Anyene, said they had reported the incident to the Nigeria Mission and South African Police.

The Senior Special Assistant to Nigeria’s President on Foreign Affairs and Diaspora, Honourable Abike Dabiri-Erewa, in a statement described the attacks as an unnecessary setback.

She advised Nigerians to be extra cautious, saying it appears the South African Government seems to have no control over the attacks.