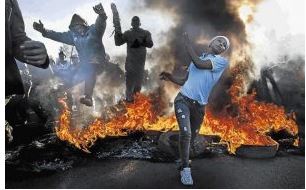 The Senate has pulled out of a scheduled trip by the Nigerian parliament to South Africa where it had intended to discuss with theSouth African government the recurring xenophobic attacks on foreign nationals, especially Nigerians and extra-judicial killings by South Africans.

The decision by the upper legislative chamber to withdraw from the trip according to the Deputy Senate President, Ike Ekweremadu, is due to the failure of both chambers of the National Assembly to reach a compromise on sending a joint delegation of parliamentarians to South Africa.

Senator Ekweremadu during plenary yesterday, while reporting progress on the outcome of senate executive session prior to plenary said that the House of Representatives against the wish of the senate to send a joint delegation insisted on traveling separately without the Senate.

“But rather than traveling separately and embarrassing ourselves, we have decided to let the House of Representatives go. We wish them safe trip and a fruitful delegation, “ Ekweremadu announced.

Africans last month, urged the Deputy Senate President to lead a delegation of parliamentarians to South Africa to address the matter with the South African government, with the aim of ensuring safety and security of Nigerians in the country.