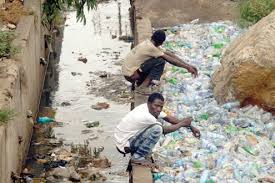 The World Health Organisation (WHO) says two billion people drink water contaminated with faeces, which is estimated to cause more than 500,000 diarrhoeal deaths each year.

Director of Department of Public Health, Environment and Social Determinants of Health at WHO, Dr. Maria Neira, said in a statement that contaminated water puts people at risk of contracting cholera, dysentery,typhoid.

Neira also said that drinking of contaminated water not only also puts people at risk of and polio, but is a major cause of several neglected tropical diseases, including intestinal worms, schistosomiasis and trachoma as well.

In a new report, WHO, also said that such a situation shows that countries are not increasing spending fast enough to meet the water and sanitation targets under the Sustainable Development Goals(SDGs).

WHO published the report on behalf of UN-Water,the United Nation inter-agency coordination mechanism for all freshwater-related issues, including sanitation.

SDGs were adopted by UN General Assembly in 2015, setting a series of aspirational targets for eradicating poverty and boosting human well-being, which aim to ensure universal access to safe and affordable water and sanitation by 2030.

A report published by UN-Water Global Analysis and Assessment of Sanitation and Drinking-Water revealed that countries had on average raised their annual budgets for water, sanitation and hygiene by 4.9 per cent over the past three years.

Yet, 80 per cent of countries acknowledge that their financing is still not enough to meet their nationally-set targets for water, sanitation and hygiene services.