270 persons have been confirmed to have lost their lives in auto crash accidents in 2016, the statistics was released by the Ogun Sector Commander, Federal Roads Safety Corps, Mr Clement Oladele. 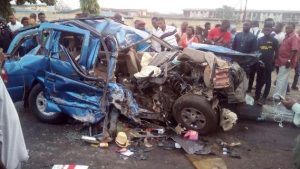 The information was given to the public at the inauguration of road traffic cautionary signposts at Onipepeye and Siun junction area of the Abeokuta-Sagamu Expressway in Ogun.

The ceremony was performed by His Royal Majesty, Oba Adedotun Gbadebo, CFR, the Alake of Egbaland.

The FRSC sector commander said that of the 383 crashes recorded in Ogun in 2016, a total of 1,366 persons sustained various degrees of injuries and were taken to various hospitals for treatment.

This figure, according to him, represented a reduction in total crashes, fatalities and injuries, by 11 per cent, 12 per cent and 9 per cent, respectively.

He explained that it was in a bid to stem `speed-induced crashes’ that the command, through its Special Marshals unit, erected speed/caution signs at the Siun/Kobape black spot to stem speeding and prevent avoidable crashes.

Earlier, Oba Adedotun Gbadebo, commended the efforts of the FRSC in reducing the tide of road crashes in the country.

The Alake debunked the notion that crashes on the Abeokuta/Sagamu expressway had spiritual undertones.

The paramount ruler of Egbaland urged motorists to comply with warning signs erected between Onipepeye and Siun junction, stressing that government’s initiative in installing the speed limiting device in commercial vehicles was for the common good of all.