Members of Deebam and Iceland, dropped out different arms and ammunition to indicate that they had embraced the fresh amnesty declared by the Governor of Rivers State, Nyesom Wike. 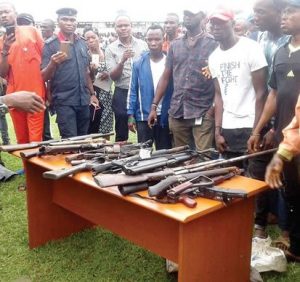 Speaking after the exercise, Chairman of the Committee on Amnesty, Mr. Kenneth Chinda, explained that the repentant cult members were initially not sincere with the state amnesty programme.

Chinda told the youths not to go back to their crime, adding that investors were interested in investing in a conducive Ogoniland.