Femi Falana ,Senior Advocate of Nigeria( SAN) has rubbished to decison of the Senate to suspend Senator Ali Ndume.

According to the Senate,  through its spokesman, had insisted that based on the internal House rules, it has the power to suspend a member even if the 1999 constitution does not validate the claim.

Falana said, “The Senate labours under the very erroneous impression that it can do anything, whether allowed by law or not; particularly when it purports to exercising its oversight functions.

“In the first place, allegations of crime, certificate forgery, allegations regarding under-payment of Customs duties, are criminal allegations that can only be investigated by the appropriate agencies of the government – the Police.

Then he went on to explain in clear language; “The Senate with profound respect, the House of Representatives with Profound respect, cannot investigate allegations of crime, (just like) the murder that took place in Ife or southern Kaduna.

“That is within the constitutional province of the Police. If somebody has stolen money, you either go to the Police or the EFCC. That is the law. You cannot audit the accounts of the federation, it is the job of the Auditor-General,” he said to the lawmakers.

He found it most unfortunate that the court has made “definitive judicial pronouncements” on similar issues but the senator chose to ignore.

Mr Falana reminded Senator Dino Melaye how he made criminal allegations against the Dimeji Bankole leadership during his time in the House of Representatives, an action which led to him being suspended indefinitely.

However, he (Falana) went to court on his (Melaye) behalf and the court told the House, “under your own rules, you cannot suspend a member for more than 14 days”. Melaye was reinstated along with others.

Falana then maintained that a group of lawmakers cannot indiscriminately overrule the mandate given by thousands of people from a constituency by suspending their representative. 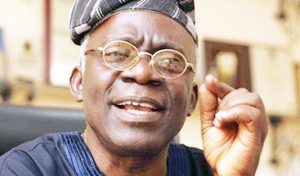