May 30 has been declared as a public holiday for the Indigenous People of Biafra as the day all supporters of Biafra will sit at home without going anywhere or doing any work.

The public holiday would be to use the day to honour the Igbo who had lost their lives in sectarian killings in the country from 1945 to date. 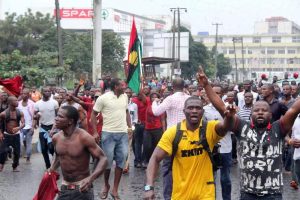 In a press statement from the group’s Spokesperson, Emma Powerful, made available to our correspondent in Awka, Anambra State, IPOB said prayers would be held at designated places to mark the day.

Their statement read in part “The indigenous people of Biafra and its leadership worldwide would like to use this opportunity to inform Biafrans, friends of Biafra, lovers of freedom all over the world and humanity in general, to prepare for the historic annual Biafra Day of Remembrance 2017.

“On the 30th of May 2017, as it is now the tradition since our leader Mazi Nnamdi Kanu held the inaugural event at our Cenotaph in Enugu on 30 May 2014, we shall honour the gallant and brave Biafran soldiers that withstood the might of the British-sponsored coalition against Biafra between 1967 and 1970.

“Our heroes and heroines of the class of 1967-1970 who paid the ultimate price in defence of the dignity of the black race during this genocidal war against the people of Biafra, will be remembered and honoured in the finest traditions of IPOB.

“This annual event for 2017 has been designated a day of prayer, fasting, supplication and introspection.

The statement added “We shall also remember all the martyred freedom fighters (IPOB & MASSOB) that fell in pursuit of our liberation from the oppression and the tyranny of Nigerian Army, Police, Navy and DSS.

“We can never forget them and we must always honour them as long as there are Biafrans on the face of the earth. Every victim of unwarranted state-sponsored sectarian violence in Nigeria will also be remembered.

“All those that sacrificed their lives in the field of battle and protests that this present generation of Biafrans might live, will be honoured, including the victims of Asaba Massacre. They will be honoured with a two-minute silence immediately the clock strikes 12noon on the 30th of May 2017.

The statement noted that the May 30 ceremony would be the fourth consecutive times IPOB had held the anniversary.

It added “The very first event was held in Enugu on May 30th, 2014, Aba May 30th, 2015 and 30th May 2016 at Nkpor Anambra State where the Nigerian Army, Police, Navy and DSS committed unspeakable crimes against humanity that brought shame to Nigeria before the comity of civilised nations around the world.

“Therefore, we expect every man, woman and children to observe this great annual event by staying at home and not engaging in any business activity.

“There will be no movement in Biafraland, both human and vehicular. Biafraland will be shut down completely as a mark of dignified respect to those that sacrificed their lives for us.

“That is the least we can do to show them and Almighty God that this generation of IPOB and those to come will remain forever indebted to them that gave their lives to stop the elimination of the Biafra race from the face of the earth.

” Equally all victims of state-sponsored genocide starting from the Jos massacre of Biafran people in 1945 to the most recent Asaba massacre in 2017 at IPOB meeting by the Nigerian Army will all be honoured”.