Home National News Ile -Ife: Police shoots one dead in latest crisis
Facebook
Twitter
WhatsApp
Ile-Ife has not known rest for the past couple of weeks as the community keep moving from one crisis to another crisis.

Last weekend, another crisis broke but according to the information gathered from an 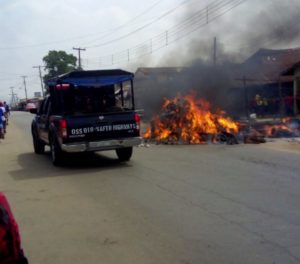 eye-witness report, one of the residents of the town told newsmen  that  the crisis started on Saturday when a youth, who  was alleged to be involved in Internet fraud also known as Yahoo Yahoo successfully duped his ‘client’ and decided to celebrate it.

The fraudster, it was gathered, duped an unsuspecting client of N8m and he was said to have gathered his friends to celebrate this.

The resident, who identified himself as Taye, said some policemen got to know about this and went to meet the youths to collect their part of the loot. The youth was said to have offered the policemen N100,000.00 which they allegedly rejected as they considered the amount meagre.

He said, “The policemen rejected the N100,000 and wanted to arrest the boys but they resisted and this led to a  fight. One of the youths was shot dead by a policeman in the process and this led to a protest.”

But another resident, Moho, gave a different account , saying that the yahoo boy was dating a girl and the girl jilted him and started dating a policeman.

The policeman was said to have got some of his colleagues and moved to arrest the ex-boyfriend but the boy and his friends were said to have  resisted arrest and this resulted into a clash. The victim was said to have been shot dead during the clash.

The Police Public Relations Officer in Osun State Command, Mrs. Folashade Odoro, did not answer repeated calls put across to her telephone to confirm the story.

However, when contacted, the Public Relations Officer of the Nigeria Security and Civil Defence Corps  in the state, Mr. Afolabi Babawale, confirmed that one Basiru was shot dead and this resulted into a protest.