United States of America President, Donald Trump has ordered a massive military strike on a Syrian air base Thursday, in retaliation for a “barbaric” chemical attack he blamed on President Bashar al-Assad. 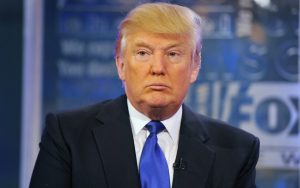 In a brief televised address delivered hours after the UN Security Council failed to agree on a probe into the apparent chemical attack, Trump confirmed the first American targeted strike against Assad’s regime.

Declaring it in America’s “vital national security interest” to prevent the spread of deadly chemical weapons, Trump accused Assad of a “very barbaric attack” in which “even beautiful babies were cruelly murdered.”

“Tonight I call on all civilized nations to join us in seeking to end this slaughter and bloodshed in Syria and also to end terrorism of all kinds and all types,” Trump said.

Trump’s visceral reaction to the suspected sarin attack prompted a swift and massive response, with the US firing 59 Tomahawk cruise missiles at the Shayrat Airfield at 8:40 pm Eastern Time (0040 GMT), according to officials.

The missiles were fired from the USS Porter and the USS Ross, which belong to the US Navy’s Sixth Fleet and are located in the eastern Mediterranean.

The strike targeted radars, aircraft, air defense systems and other logistical components at the military base south of Homs in central Syria, from where Washington believes Tuesday’s deadly strike was launched.

Syrian state television called the US strike “an act of aggression,” quoting a military source saying there had been unspecified losses.

The swift US military action against the Assad regime marks a stunning development in Syria’s brutal, six-year conflict and a sudden about-face for Trump.

It came despite a warning from Russia of potential “negative consequences” if Washington strikes Syria.

Secretary of State Rex Tillerson accused Russia — which props up the Assad regime and agreed to mothball Syrian chemical weapons in a 2013 deal  — of being incompetent or complicit in permitting Assad’s actions.

A White House official said that Tillerson and Secretary of Defense Jim Mattis had liaised with allies about the military strike.

Trump, who is currently hosting Xi Jinping at his Mar-a-Lago resort, informed the Chinese leader personally.

But there was no such warning for President Vladimir Putin. Instead Russian military officials in Syria were informed of the strikes beforehand in order to avoid casualties that could prompt a broader crisis.

White House and military officials at Mar-a-Lago watched this first major military and foreign policy gambit of Trump administration from a stuffy tent that served as the temporary Sensitive Compartmented Information Facility — or SCIF.