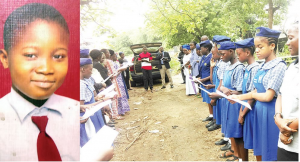 It was a sad moment for students of Queens College as they had to bury one of their colleague, Praise Sodipo who died from the outbreak of  diarrhoea at the school.

Representatives of the school’s management, colleagues, family and friends of the victim paid their last respect to the 14-year-old, who died at the Lagos State University Teaching Hospital, Ikeja, last Friday.

Some of the mourners broke down in tears when the coffin was opened for all to see late Sodipo, who was dressed in her school uniform.

The Senior Secondary School one pupil was buried around 11am.

Meanwhile, the Federal Ministry of Education has admitted blame in the death of the three pupils of the school, saying the incident could have been prevented if proactive steps were taken.

According to reports, many pupils of the school were admitted in the sickbay after eating spaghetti and drinking water said to have been contaminated.

Two pupils – Vivian Osuiniyi and Bithia Itulua –  who were in Junior Secondary School two and three respectively, reportedly died as a result of the epidemic.

The Minister of Health, Isaac Adewole, had led a team to the school and ordered an investigation into the incident, just as the then Principal of the school, Dr Lami Amodu, denied the epidemic, blaming the report on haters of the school.

Amodu was later transferred from the school.

The Lagos State Commissioner for Health, Jide Idris, a few weeks later released a statement saying health records from the school’s sickbay indicated that a total of 1,222 pupils presented themselves at the school’s clinic on account of abdominal pain, fever, vomiting and diarrhoea.

The statement noted that 16 pupils were admitted to various hospitals. While two were confirmed died, one was on admission at the Intensive Care Unit of LASUTH.

Sodipo, who was the pupil in the ICU, died on Friday, bringing the number of deaths to three.

It learnt that the victim’s family took her remains from LASUTH mortuary around 10am on Thursday.

The hearse bearing the body was accompanied by the family to the Atan Cemetery where sympathisers had converged.

The group observed a short service of songs, led by a minister at the Redeemed Christian Church of God, City of Refuge Parish, Pastor Joseph Ekato.

Ekato condoled with the family and prayed to God to give them the fortitude to bear the loss.

The coffin was subsequently lowered into the grave.

Her guardian, Lawrence Otun, said she was only eight when she lost both parents who were ministers at the RCCG. She was their only child.

He said she was enrolled in Queen’s College four years ago, being the only pupil to be admitted on merit from Osun State.

He said, “The sickness started from the school, but they refused to inform us. It was when my wife went to pick her for the midterm break that she discovered that the girl had been terribly sick and was admitted to the sickbay. She took her to a hospital.

“We were treating malaria when a doctor advised that we do a scan. The scan showed she had liver enlargement. The doctor referred us to Lagos University Teaching Hospital, Idi Araba. Because it was late, my wife brought her home.

“When I, however, saw how she was breathing, I quickly rushed her to a private hospital around 11pm where she was placed on a drip till the following morning. We were advised to do another scan.

“The new result showed that she had perforated intestine due to chronic typhoid said to have been caused by the contaminated water in the school.”

He explained that she was transferred to LASUTH in an ambulance and was admitted.

A surgery was later conducted at the hospital.

Around 1pm on Saturday, she was reportedly transferred to the ICU, where she was placed on oxygen.

Otun said the illness got worse as she started convulsing and went into a coma, adding that she was placed on a life support.

“We spent over four weeks at the hospital; I couldn’t go to work. Despite all that, she still did not make it,” he added.

A family friend, Steven Babatunde, described the victim as brilliant and intelligent, adding that she was a mentor to some teenagers in her local church.

“The girl could have become a great leader in the future, but her life was cut short by the carelessness of some people. The former principal and the Federal Government must pay for this,” he said.

Meanwhile, the Federal Ministry of Education has said some lapses caused the death of the three pupils of the school.

The Director of Basic and Secondary Education, Federal Ministry of Education, Jonathan Mbaka, told journalists on Tuesday during an interview that the monitoring team of the education quality assurance inspected the school prior to the outbreak.

He said, “I must confess that there were lapses in the ministry concerning the report filed by the Education Quality Assurance team.

“Unfortunately, it was this week that I was able to get access to that report. It is a little lapse on our part. But it is a procedural issue and when procedure has existed for too long, to change it becomes an issue. No one expected such to happen; other reports had been kept like that and nothing happened.”

Mbaka, who also faulted the former principal of the school for denying the incident, noted that it was after the new principal came into office that the government knew there was a crisis in the school.

“The challenge we had was that the facts were not coming to us. I can inform you that I have visited the school three times. When I visited the school, I postponed the resumption for two weeks when I saw what was on ground.

“We have discovered that there is a failure in the system. This has opened our eyes to a lot of things. And we have agreed that after this issue, we will visit each of the unity schools for assessment. With this, I believe that we will not have a repeat of such,” he added.

The Minister of Education, Mallam Adamu Adamu, in a statement, condoled with families of the victims, saying the government was addressing the problem.

He urged the pupils doing examinations in the school to continue to come from home, adding that the school would soon resume normal academic activities.