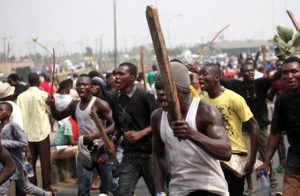 An angry mob beat a man suspected to be insane to death after he was allegedly beat to death a beverage vendor, identified as Mrs Ifeyinwa Obalum, 40, at Amaezike village, Mgbakwu in Awka North Local Government Area of Anambra State.

An eyewitness at Mgbakwu on Friday said that the deceased was intercepted by the man and attacked with a machete.

She said that the command received a distress call from the villagers that the suspect, one Benjamin Madubueze, 38, had murdered the deceased.

She said, “One Benjamin Madubueze, 38, murdered one Ifeyinwa Obalum, 40, by giving her machete cuts on her head, hands and neck which led to her death.”

Nwode said that unfortunately an angry mob killed the suspect and threw his dead body inside his house and set the house ablaze.

“But we succeeded in retrieving the half-burnt body from the fire at the scene,’’ she said.

The police spokesperson said that the woman’s corpse had been deposited at Isuaniocha mortuary for autopsy.

A member of the community, Mr Nduka Nzekwe, said that Mmadubueze, also known as Eze-Amosu (Chief Wizard), who returned from overseas a few years ago, was reported to have been acting in strangely.

Nzekwe urged security agents in the state to investigate the incident and prevent such recurrence.

“On several occasions, we had seen him with machete. Just this morning, he waylaid a woman, Ifeyinwa Obalum, who caters for her 80-year-old blind husband and butchered her to death.”

“This is very serious because the first son of the deceased who is supposed to be taking care of the family is mentally challenged,’’ he said.

A sympathiser and youth leader, Mr Christian Chukwuma, recalled that such incident had happened in the community a few months ago.

He called on the government to assist in the rehabilitation of people with mental challenges to prevent a repeat of such incident.

“It was very shocking to me when I heard the sad news. Sometimes ago, it happened at Amaezike village. A woman invaded another woman’s house and hacked her to death,” he said.