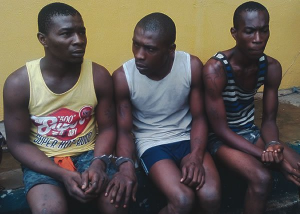 It was a lucky day for a man that was abducted by kidnappers on March 17, 2017 identified as Duru Christopher as he was rescued by the  Operatives of the Abia State Police Command attached to the Ndiegoro Division.

According to a police source in Aba said Christopher was rescued following a tip off on where the suspects kept him while waiting for the payment of ransom.

The source stated that the policemen swooped on the suspects, rescued the victim and arrested the duo of Chiemezie Ezeigbo (aka Landlord) and Emeka Ukaegbu (aka Small pin) who were keeping guard over the hostage.

It was gathered that one Julius Nnachi, who hails from Edda in Ebonyi State, was also arrested by the operatives in connection with the crime.

The Commissioner of Police in the state, Mr. Adeleye Oyebade, who confirmed the arrest of the suspects, stated that they had been identified as having a link with the murder of four members of the Abia State Vigilante Group, who were shot on February 27, 2017.

Also in the police net is one Salisu Ibrahim arrested by the operatives of the anti-kidnapping team of the Abia Police Command.

It was learnt that the patrol team intercepted a blue Volkswagen Sharan van, whose occupants fled into the bush on sighting a police patrol team.

Oyebade said the suspects confessed to the crime, adding that investigation was in progress towards the arrest of other members of the gang.