The Internally Displaced Persons (IDPs) at Pompomari camp in Damaturu, Yobe, say they are not in a haste to return to their communities that has been liberated from Boko Haram terrorist group. 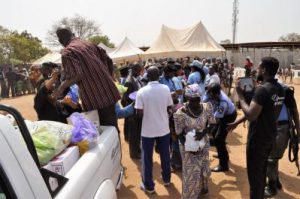 A cross section of the IDPs who spoke to News Agency of Nigeria on Monday in Damaturu said life in the camp was far better than what obtained in their villages.

Bukar Makinta, an occupant of the camp, said, “we have been enjoying three-square meal in the camp provided by State Emergency Management Agency since our arrival in 2015; we also have clinic and school here.

Another occupant, Modu Kaka, said they were fed with beans, spaghetti, rice and Semovita, among other delicacies.

Bulama Shefuri, an elder in the camp, also said women had engaged in animal fattening using leftover of food to feed the animals.

“They collect the food remnants and you can see the crumbs spread all over in the sun to dry up to feed goats and sheep,” Bulama said.

The IDPs said they had better food, school, healthcare and security in the camp.

Alhaji Musa Jidawa, Executive Secretary, SEMA, said government had been feeding the IDPs since the camp was established in 2015.

“Government had consistently been feeding 4,000 IDPs at the Pompomari camp and 3,000 others at the Bukar Ali primary school camp.

“However, those at Bukar Ali camp willingly requested to return to their communities and the camp was closed down, while, we now have over 2,000 IDPs at the Pompomari camp as some of them have also left,” Jidawa said.

The Secretary confirmed that the IDPs were fed with rice, beans, spaghetti and Semovita.

“We also slaughter cows to provide them with meat,” Jidawa said.