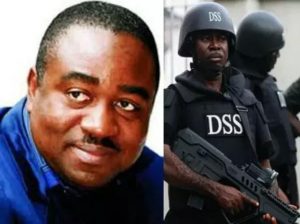 A Federal High Court, Abuja, on Tuesday ordered the Department of State Service to produce former Benue Governor, Gabriel Suswam, in court on May 11 for his arraignment.

The Federal Government had accused Suswam and two others of diverting N9.7bn, being part of funds from the Subsidy Re-investment and Empowerment Programme.

The fund was allegedly diverted between 2012 and 2015 while Suswam was the governor of the state.

The arraignment was, however, stalled following Suswam’s absence in court.

Suswam and Oklobia are also standing trial at the Federal High Court, Abuja, on different matter bordering on embezzlement of state funds .

The News Agency of Nigeria reports that Suswam is currently in the custody of the DSS over another matter bordering on allegation of illegal arms possession.

The prosecuting counsel, Mr. Aminu Alilu, told the court that Suswam could not be served with the charge because he was being held by the DSS.

Alilu further said the prosecution also attempted to serve the ex-governor through the DSS.

“We have a letter to that effect and the acknowledged copy by the office of the DSS,’’ he said.

Counsel to Suswam on other matters, Mr. Adedayo Adedeji, said the prosecution misled the court to submit that Suswan refused to be served.

“Yesterday at about 3: p.m. two officers from the police walked into our office, seeking to serve Suswam, but because of respect for this court, we received it.

“Our objection is that being an originating summons, the first defendant ought to have been served personally.

“It cannot now be correct to say that Suswan refused to be served, we submit that in the absence of the first defendant, this matter cannot go on,” he said.

The judge, Justice Gabriel Kolawole, therefore, instructed the DSS to ensure Suswam was present in court in the next adjourned date.

Justice Kolawole subsequently adjourned the matter till May 11 for the arraignment of the defendants.