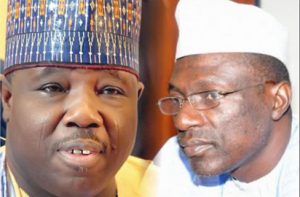 There might not be peace in the Peoples Democratic Party( PDP ) anytime soon as the faction loyal to National Caretaker Committee Chairman, Senator Ahmed Makarfi, in the South West has vowed not to attend any peace meeting with the National Chairman of the party, Senator Modu Sheriff.

In a communique issued at the end of the meeting and read by the National Vice-Chairman, Eddy Olafeso, the party declared total support for Makarfi, in the quest to reposition, reorganise and promote the standing of the party in Nigeria.

“We are resolved to ensure that our Party, the PDP, will not be hijacked and taken over by fifth columnists and APC agents as represented by the Ali Modu Sheriff group.

“That this meeting resolves resolutely not to honor any further meeting geared towards reconciliation with the Sheriffs group as they are totally extraneous to our Party and therefore of no use to the well-being of our party.

“We also take due cognisance of the fact that a number of unprincipled and fair weather politicians are busy defecting from our party to the All Progressives Congress.

“Therefore we call on all our members in the South West not to be discouraged or alarmed at this development as it is temporary.

“We also wish to underscore the fact that no politician worth his salt should consider defecting to the ruling party that has ruined the economy and impoverish Nigerians to this odious level.”