Members of the Shi’ite group took to the streets to protest against the arrest of their leader and his wife Ibraheem El-Zakzaky, and Zeenat.

The protest was however disrupted by men of the  police force by unleashing dogs on them and firing water cannons and tear gas canisters to disperse the crowd.

The incident caused gridlock on the popular Shehu Shagari Way as the protesters ran helter-skelter into the road to evade the assault.

The Shi’ite members had gathered at the Unity Fountain, Maitama to protest the continued detention of their leader, Ibraheem El-Zakzaky, and his wife, Zeenat, by the Federal Government when the police stormed the arena and chased them away.

The personnel from the Federal Capital Territory Police Command unleashed their dogs, forcing some of the protesters into the road and paralysing traffic. 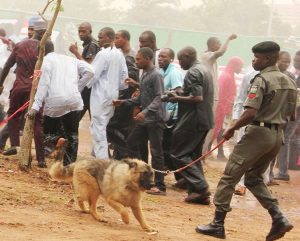 that before all hell was let loose, the police had directed the crowd to vacate Unity Fountain, but the Shi’ite members reportedly ignored the order.