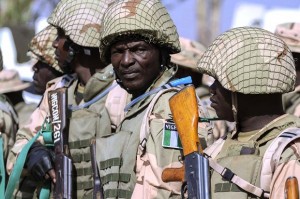 The quest to put a lasting end to Boko Haram has continued on a rise as the troops of the Operation Lafiya Dole and the Multi-National Joint Task Force have killed at least 57 Boko Haram terrorists in Arege area of northern Borno State, during a gun battle.

The Boko Haram insurgents, who were regrouping under trees in the area, were reportedly caught by an Intelligence Surveillance and Reconnaissance platform of the air component, Lafiya Dole, before the MNJTF troops opened fire on them.

Some Soldiers were injured in the gun battle  but the number of was not disclosed.

He added that clearance operations were ongoing in the Sambisa area, noting that adverse weather would be a challenge to troops during the present rainy season.

He said, “In Arege village of northern Borno, on Monday, an ISR operation was carried out. We discovered that a lot of fleeing Boko Haram insurgents hid under trees and the adverse weather prevented us from taking them out in an air strike. So, we communicated with the MNJTF troops around the location.

“In the fire fight which ensued, at least 57 Boko Haram members were killed by the MNJTF forces. Several arms and ammunition were also recovered from the insurgents.

“In Tagoshe and Gwoza hills, there were also indications that the Boko Haram terrorists had hideouts and we mobilised the ISR platform to the place. We thereafter conducted air interdiction and blew up the terrorists. We have and will continue to monitor all these areas.”

On the Rann accidental bombing on Tuesday, January 17, the commander noted that the NAF authorities would reach out to the victims of the incident and their families, as soon as the NAF panel set up to investigate the incident unveiled its findings.