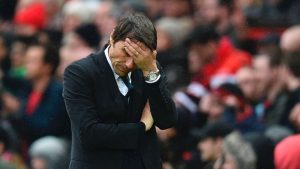 Manager of Chelsea Football Club, Antonio Conte has taken full responsibility for the poor performance put up by his team against Manchester United at Old Trafford.

The league leaders were humbled by the Red devils  2-0, the lead of the leaders have been cut short to just four points ahead of Tottenham at the top of the table, having led by 10 points in March.

Conte said, “We didn’t play a good game and United deserved to win the game.

“They showed more desire, more ambition, more motivation. In this case the fault is of the coach.”

He added: “It means the coach was not able to transfer the right concentration, desire, ambition to win this game.”

Spurs have put themselves into title contention with a run of seven successive league wins, while Chelsea have slipped up with two losses in their past four games.

“I have concern because we have to work together and find quickly the right ambition to win this title,” said Italian Conte, whose side face Tottenham in an FA Cup semi-final at Wembley on Saturday.

“If someone thinks it’s normal for Chelsea to win the title, we started as underdogs after 10th place last season.

“Tottenham is in good form and playing with enthusiasm, we must find the same.”