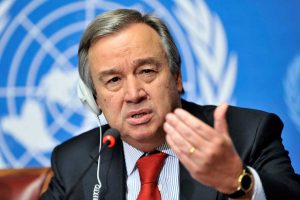 The recent tension between North Korea and the U.S have been a major concern to so many around the world, according to the  United Nations Secretary-General António Guterres on Monday who on Monday  expressed concerns on the rising tensions over North Korea in recent weeks.

The statement was made known by the Spokesperson to the Secretary-General, Mr Stephane Dujarric, at a briefing, called on all parties to employ diplomatic options to resolve the crisis.

“We’re obviously deeply concerned about the rising tensions that we’ve seen in the Korean Peninsula.

“We call on all to redouble their diplomatic efforts. I think the latest launch that we saw over the weekend from the DPRK was troubling.

“We call on the DPRK (North Korea)to take all the steps necessary to de‑escalate the situation and return to a dialogue on denuclearization.

“All Security Council resolutions must be fully implemented, and we note that the Security Council has consistently stated its commitment to a peaceful, diplomatic, and political solution,” he said.

He noted that the UN used to have a Special Representative for North Korea, but that the position had not been filled.

“The post has been unfilled for quite some years. But I’m not aware of any plans to appoint someone, which should not mean that we’re not watching the situation very carefully.”

Kim In Ryong, North Korea’s Permanent  Representative to the UN, also warned against nuclear war at a news conference.

“The prevailing grave situation proves once again that the DPRK was entirely just when it increased in every way its military capabilities for self-defense and pre-emptive attack with a nuclear force as a pivot.

“It has created dangerous situation in which the thermonuclear war may break out at any moment on the peninsula and pose a serious threat to the world’s peace and security, to say nothing of those of northeast Asia,” he said.

Kim said the U.S. President Donald Trump’s deployment of the Carl Vinson nuclear carrier task group to waters off the Korean Peninsula again “proves the U.S. reckless moves for invading the DPRK have reached a serious phase of its scenario”.

The North Korean diplomat stressed that U.S.-South Korean military exercises being staged now are the largest-ever “aggressive war drill” aimed at his country.

He warned that North Korea would take toughest counter actions threatening, “we will hold the U.S. accountable”.

There were reports that North Korea attempted another missile launch over the weekend but it failed.