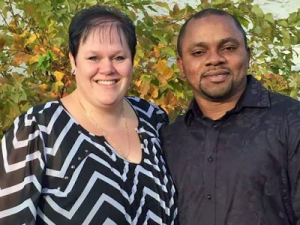 A Nigerian couple identified as Victor Omoruyi and  Michelle Omoruyi ,have been arrested by the authorities in the United States say a Nigerian ,and two Canadian citizens have been apprehended as part of an investigation into human smuggling.

Officials with U.S. Customs and Border Protection said yesterday, in a statement, their own agents apprehended the two Canadian citizens and Mr Omoruyi on the North Dakota side of the border between North Portal and Northgate. According to The National Post, Mr Omoruyi was being held Thursday at the Grand Forks County Correctional Center.

On Wednesday, April 20, authorities announced that Michelle Omoruyi, 43, of Regina, was facing rare human smuggling charges after she was stopped by RCMP last Friday evening driving a vehicle near the border with nine foreign nationals from West Africa.

So far, authorities have released few details about how these individuals fell under suspicion and whether other arrests could follow. But a senior U.S. border official said Thursday the growing numbers of migrants seeking to jump the border has everyone on high alert.

The nine individuals had bypassed formal channels to come into the country, entering instead somewhere between the North Portal and Northgate crossings, the legal entry points into Saskatchewan from North Dakota. They subsequently filed refugee claims and were released from CBSA custody pending the outcome of their refugee hearings.

The following day, police searched a Regina residence and found a significant amount of cash — some in foreign currency, RCMP said.

The identities of the other two — a man and a woman — could not be verified, but Zeitvogel confirmed all three were still in custody and charges were pending.

It is not known how many other people may be connected to the suspected smuggling operation. The charges against Omoruyi have not been proven in court.

There are many reasons why migrants might pay a smuggler to help them get across the border, Zeitvogel said. Maybe it’s because of their knowledge of the area or because they can provide a means of transportation, he said.

In January, five Nigerians including three children were believed to be headed for Saskatchewan but became stranded in a North Dakota field near Portal in the bitter cold.  Burke County Sheriff Jeremy Grohs said they were suffering from frostbite and the onset of hypothermia. The youngest, about 15 months old, was flown to the hospital.

According to federal data, Saskatchewan saw only a handful of irregular border crossings from asylum seekers in the first three months of this year. Nationwide, the number of irregular crossings climbed from 315 in January, to 658 in February, to 887 in March.