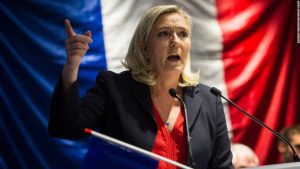 Muslims might have to find another country to stay other than France as the French presidential candidate, Marine le Pen has demanded the closure of all Islamist mosques,following a deadly attack on a police bus in Paris last night that left one officer dead.

The Prime Minister, Bernard Cazeneuve, accused her of trying to capitalize on the attack.
She made the call during a televised news conference today as she urged the country to embark on a closure of all “Islamist” mosques in France as well as the expulsion of hate preachers and the reinstatement of French borders as soon as possible.
Source: ( Linda Ikeji )
Advertisement