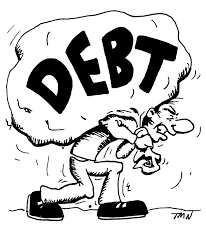 The challenge of defaulting credits, which has put the banking system under pressure, may not end soon as financial institutions’ top 50 debtors owe N5.59 trillion (34 per cent) of total industry credit exposure of N16.29 trillion.

But an adverse economic impact on the borrowers and their businesses, resulting in rising default, additional provisioning by banks and consequent reduction in banks’ Capital Adequacy Ratio (CAR), has been blamed for the default.

The N5.59 trillion represents 77 per cent of the nation’s 2017 federal budget proposal at N7.3 trillion, and would comfortably fund the non-debt recurrent expenditure at N2.98 trillion, as well as capital expenditure of N2.24 trillion.

It also amounts to the size of three large banks; six medium size banks; the entire small size banks; and the entire capital base requirements of all the banks and other financial institutions in the country. What this effectively says is that administration of credit by the banks has not been widespread. It is restrictive, leaving unserviced a large chunk of small and mid-scale operators who need financial lifelines to remain afloat.

But despite the NPL challenges, Nigerian banks have been adjudged stable in a six-month financial stability test, amid declining economic growth, rising credit risks and default that have affected the operations.

The stability of the banking sector has been attributed to the regulatory foresight in adopting prudential ratios that are far above international thresholds, which now serve as a buffer for the operators in difficult times.

Credit default has become a lingering challenge in the banking sector, with the Asset Management Corporation of Nigeria (AMCON), battling non-responsive debtors that liquidated some lenders since 2010, while fresh ones are now piling up, creating an operational and survival dilemma.

The Managing Director of First Registrar, Bayo Olugbemi, said the problem of credit was not about the volume, but the level of performance. He sees nothing to worry about in the number of people involved in the debt but cautioned that financial institutions no longer have excuse for not checking up the background of creditors before proceeding, as it has become easier with emerging policies and technologies.

“The Bank Verification Number (BVN) is now operational, hence a serial debtor will not succeed easily in duping several institutions at once. Again, banks would need to step up their monitoring of loans performance,” he said.

Frontline economist, Bismarck Rewane, said it was not totally unexpected given the challenging macroeconomic situation in the country, but admitted that increase in industry NPL, with such debt concentration, must be watched.

“Of course, in a high interest rate environment with challenging economy, the level of default must rise. This shows that something more needs to be done, otherwise the trend will continue with obvious repercussion,” he said.

As at December 2016, loans to the oil and gas sector constituted 30.02 per cent of the gross loan portfolio of the banking system as credit to that sector grew from N4.5 trillion to N4.9 trillion.

The development showed that despite the economic misfortunes of crude oil, banks are still lending heavily to the sector operators, and perhaps in efforts to aid further their operations or to other related sub-sector.

“Overall, credit risk remains tangible in 2017 as obligors remain constrained in servicing both naira and foreign currency-denominated loans due to the low level of economic activities, low international oil prices and the depreciation of the naira,” the Financial Stability Report of the Central Bank of Nigeria noted.

The liquidity ratio for the banking industry increased by 1.35 percentage points to 43.96 per cent, above the prudential minimum limit of 30 per cent, as they all raised stake in government’s assets with the increased Monetary Policy Rates from 12 per cent to 14 per cent.